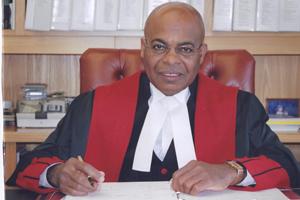 Selwyn Romilly was born in Trinidad and left home when it was still a British colony. His father, a school principal, had always insisted that his kids get professions. Romilly’s brother Valmond also decided to practice law and became a judge like his brother. His first choice was to study in England, but friends of his who were studying engineering at UBC convinced him to move to Vancouver. He confesses that his decision to go to UBC was partially influenced by Vancouver’s mild weather.

He entered law school in 1963. At the time, he was the fourth black law student in the history of UBC, and the first of whom to graduate. At UBC, Romilly was particularly impressed by Malcolm MacIntyre, a professor that “told you what to really expect in practice.”

On completing his LLB, Romilly found a position in Kamloops. After finishing his articles, Romilly headed up north to Prince Rupert, but was stopped by a local lawyer in Smithers, who begged him to stay.

In 1972 Deputy Attorney General Dave Vickers was in the process of re-organizing the judicial system and replacing all of the law magistrates; Vickers offered Romilly a position on the bench, which Romilly initially rejected. Romilly eventually acquiesced however, and became a judge in 1974.

Reflecting on the changes brought by the Charter to the law, Romilly says that the interpretation of 24(2) has greatly expanded, and that judges must player a greater role in remedying Charter infractions. Although Romilly admits that with the advent of the Charter greatly expanded the time it takes for trials to be completed, the Charter plays an important role in maintaining public confidence in the administration of justice.

Talking to the Law History Project, Romilly offered a lot of advice to young lawyers. “Always go to work early, read thoroughly, and stay organized,” he says. “If you want to get ahead, you have to be civil outside of court. Get to know the names of your friends.”

For more information, watch a February 2019 interview with Romilly or listen to his Allard School of Law Oral History Project interview.