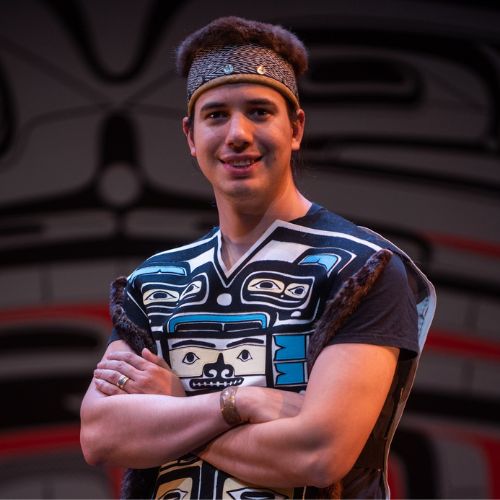 Nigel is a Gitxsan-Cree lawyer at White Raven Law. He’s also the lead dancer with the Vancouver-based Indigenous dance troupe Dancers of Damelahamid, a scholar and a teacher of law, as well as a father to two young children – and just three years out of law school.

Nigel Baker-Grenier’s journey into law began as an undergraduate student studying history. His interest in expanding the discipline to include Indigenous oral traditions and perspectives led to a realization that history’s focus on the past obscured of the living nature of Indigenous nations and their legal systems. “I looked towards law as a way of understanding how our legal systems are vibrant, dynamic and relevant today,” he explains.

Nigel began his studies at Allard Law as the father of a three-month-old baby. This meant having to be judicious with time management, and he’s grateful to have had his family’s support while studying.  “It was definitely challenging,” he says. “But I made it through, and I found that as I got through 2L, 3L, I was able to gain momentum and to really thrive in the upper years. I’ve found that the momentum has carried onto practice.”

During his JD, Nigel worked as a student clinician at the Indigenous Community Legal Clinic (“ICLC”), which he says was one of his most meaningful and formative law school experiences. “The ICLC is an invaluable community resource – there are no other legal clinics in Vancouver that specifically serve Indigenous communities,” he says. He also found the real-world experience he gained at the ICLC to be consistent with Indigenous pedagogy, which strongly emphasizes learning by doing, and says this approach pushed him to grow as a lawyer. “It’s one thing to learn about law from a textbook at the law library. It’s another to be meeting with clients, going to court, and engaging in the practice of law,” Nigel adds.

Nigel has returned to the ICLC as an instructor, teaching the clinic’s academic seminar. He has found mentoring students at the ICLC just as rewarding: “You get a team of really dedicated students that are there because they want to be there and they really put in 110%.”

Nigel has grown up with dance. Dancers of Damelahamid was established in the 1960s by his grandparents, Ken and Margaret Harris, to reinvigorate Indigenous culture and artistic traditions. He’s travelled extensively around the world with Dancers of Damelahamid, performing in Australia, New Zealand, China, and most recently Dubai. He’s also incorporated dance into his legal practice, choreographing a piece entitled Talking Past Each Other as a multidisciplinary project for a seminar under Professor Michael Jackson as a JD student. Last fall, when teaching at Allard Law on Indigenous-Settler Legal Relations, Nigel encouraged his students to pursue creative approaches to law by allowing them the option of multidisciplinary projects. Nigel even finds beauty in legal practice, “Oral advocacy in law is also a presentation, so I think that confidence and having artistry in the way that you speak and conduct yourself is helpful both on stage and in the courtroom,” he explains.

His own children carry on their family tradition, dancing at the time of this interview at the Vancouver Children’s Festival. In another twist, Nigel also met his current boss, Allard alumna Terri-Lynn Williams-Davidson, through dance.

Since graduating from law school, Nigel is thriving as an Associate at White Raven Law, where he credits colleagues and the supportive work environment for encouraging his passion for meaningful legal practice. Called to the bar in 2020, White Raven held a special ceremony for him after his official ceremony was cancelled due to the pandemic, which he describes as the highlight of his legal career so far. Nestled in a quiet forested area in White Rock, Nigel’s achievement was celebrated amongst family and colleagues. “Everyone shared words of encouragement. It was just one of those moments that will stick with me for life, the kindness that people had.”

Nigel’s work at White Raven revolves around constitutional questions and administrative law, working with organizations and First Nation governments. While recognizing the enormous strides that have taken place in Canada with regards to Indigenous communities, Nigel is well aware that more change is needed. And as a young Indigenous lawyer, he’s taken on the responsibility of advocating for those changes.

“There are a lot of systemic injustices in Canada’s legal system today that continue to dispossess Indigenous people from their land,” explains Nigel. He’s been working with the Haida Nation on an Aboriginal title claim, a case that involves novel legal questions that have never been brought before the Canadian courts, such as how Aboriginal title applies to marine spaces. He notes that new legal challenges present opportunities for innovative legal thinking, and he’s enjoying the process.

Nigel’s advice for current JD students preparing to transition into practice is to remain principled, to bide their time and not give up in their search: “The right work will find you. Don’t sell yourself short. Legal practice is fun and exciting as well.